Tehran 15 February _US President Donald Trump’s administration is deploying highly trained officers to boost arrests of unauthorized migrants in cities across the country. 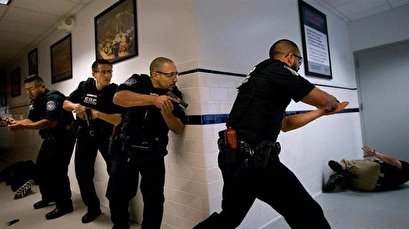 A senior official with the Department of Homeland Security (DHS) told NBC News that the Customs and Border Protection officers were being deployed to work with Immigration and Customs Enforcement (ICE) from February to May to “enhance integrity of the immigration system, protect public safety, and strengthen our national security.”

Acting ICE Director Matthew Albence confirmed the cooperation, saying that in "jurisdictions where we are not allowed to assume custody" of immigrants from jail, their immigration officers were "forced to make at-large arrests" of immigrants who had been "released into communities," The Hill reported.

"When sanctuary cities release these criminals back to the street, it increases the occurrence of preventable crimes, and more importantly, preventable victims," he said.

The deployment is the latest in Trump’s battle against localities that adopt the so-called sanctuary policies, which protect illegal immigrants from deportation. Los Angeles, Chicago and New York are among the cities with such policies.

“Democrats must change the Immigration Laws FAST. If not, Sanctuary Cities must immediately ACT to take care of the Illegal Immigrants - and this includes Gang Members, Drug Dealers, Human Traffickers, and Criminals of all shapes, sizes and kinds. CHANGE THE LAWS NOW!” Trump tweeted last year.

In his State of the Union address, Trump accused sanctuary cities of releasing dangerous criminal aliens to prey upon the public.