Tehran 16 February _Yemen's Houthi Ansarullah movement has released a video of its Friday shoot-down of a Tornado fighter jet operated by the Saudi-led coalition in the skies of Jawf province in northern Yemen. 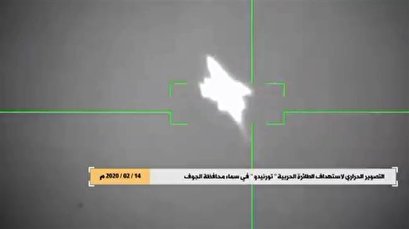 TEHRAN, Young Journalists Club(YJC)_According to General Yahya Saree, the spokesman for the Ansarullah movement, the aircraft was targeted late Friday night in the province of al-Jawf, which borders Saudi Arabia.

Saree also noted that the multi-role combat aircraft was downed with an advanced surface to air missile.

The video of the downing was released on Saturday by Yemen's Al-Masirah TV.

The TV channel has also released a video of the plane wreckage, and the Houthi fighters searching the crash site.

Following the incident, Saudi warplanes bombarded the area where the fighter jet was downed, killing over 30 civilians.

Back in January 2018, the Yemeni missile units managed to shoot down a Tornado fighter jet and an F-15 warplane. Furthermore, the Yemeni forces have so far shot down numerous Saudi-led combat or surveillance drones as well as a number of helicopters.