Tehran 21 February _Roger Stone, President Donald Trump’s longtime friend and political adviser, has been sentenced to more than three years in prison over charges stemming from investigation into the alleged Russian interference in the 2016 US presidential election. 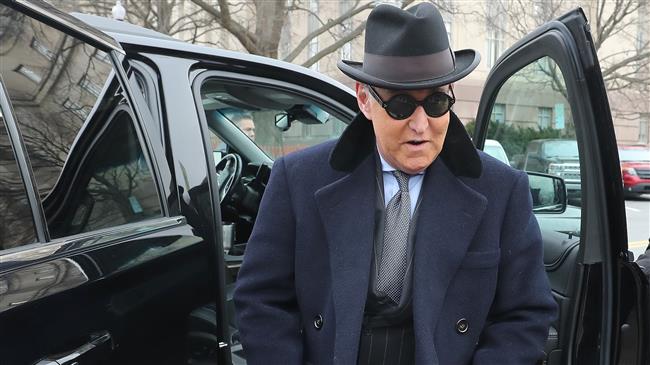 TEHRAN, Young Journalists Club(YJC)-Stone is the sixth Trump aide convicted in a criminal case as part of special prosecutor Robert Mueller's probe into alleged collusion between Moscow and the Trump campaign during the 2016 election.

The penalty from US District Judge Amy Berman Jackson came on Thursday over charges that include witness tampering, false statements, and obstruction of justice.

Jackson also ruled that Stone, 67, pay a $20,000 fine, serve two years of probation after his sentence, and perform 250 hours of community service.

"The defendant lied about a matter of great national and international significance. This is not campaign hijinks. This is not just Roger being Roger," said Jackson.

She also rejected Trump's attacks on federal prosecutors for bringing the case against Stone, saying that "there was nothing unfair, phony, or disgraceful about the investigation or the prosecution."

The federal prosecutors in Stone's case originally recommended a sentence of seven to nine years based on federal sentencing guidelines.

Trump had previously called the initial recommendation "horrible" and "unfair."

This is a horrible and very unfair situation. The real crimes were on the other side, as nothing happens to them. Cannot allow this miscarriage of justice! https://t.co/rHPfYX6Vbv

After the ruling, the president said he would be monitoring Stone’s case closely, suggesting he may pardon his ally.

"We will watch the process and watch it very closely. And at some point I will make a determination. But Roger Stone and everybody has to be treated fairly. And this has not been a fair process."