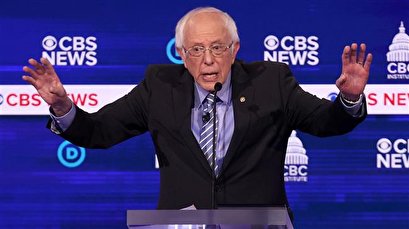 TEHRAN, Young Journalists Club(YJC)-Sanders made the remarks at the 10th Democratic presidential debate on Tuesday in Charleston, South Carolina, after he was asked a question about criticism from some fellow Jews who say he is not supportive enough of Israel.

"I'm very proud of being Jewish. I actually lived in Israel for some months. But what I happen to believe is that right now, sadly, tragically, in Israel, through Bibi Netanyahu, you have a reactionary racist who is now running that country," Sanders said.

Sanders said in a tweet on Sunday that he would not be attending the annual AIPAC conference, accusing the pro-Israel lobbying group of providing a platform to “leaders who express bigotry and oppose basic Palestinian rights.”

An AIPAC spokesman fired back at Sanders’ comments, saying in a statement that the senator “has never attended our conference and that is evident from his outrageous comment.”

Sanders, an independent senator from Vermont, has become the clear frontrunner in the Democratic presidential race after strong showings in the first three nominating contests in Iowa, New Hampshire and Nevada.

Sanders, who calls himself a democratic socialist, proposes left-wing policies like increasing the minimum wage and scrapping private health insurance in favor of a government-run Medicare for All program, based on the government program for elderly Americans.

His momentum has alarmed a Democratic establishment wary of his plans to end economic inequality and strengthen the social safety net, something that will lead to defeat against Republican President Donald Trump

Sanders is the second Democratic presidential candidate to say he will not be attending the AIPAC conference, which will take place in Washington on March 1-4. Massachusetts Senator Elizabeth Warren also said earlier this month that she would not attend.

This is not the first time that Sanders has condemned Israel’s policies against the Palestinian people. He has repeatedly criticized Netanyahu and has advocated for Palestinian rights.

During a town hall meeting last week in Nevada, Sanders pointed to the humanitarian crisis in the Gaza Strip.

"To be for the Israeli people and to be for peace in the Middle East does not mean that we have to support right-wing, racist governments that currently exist in Israel."

Sanders has also been a relentless critic of Trump, repeatedly calling him a liar and the “most dangerous president” in US history.