Tehran 29 February _Malaysia's 94-year-old Mahathir Mohamad lost out in the battle to become prime minister on Saturday as the king named former interior minister Muhyiddin Yassin after a week of political turmoil sparked by Mahathir's resignation. 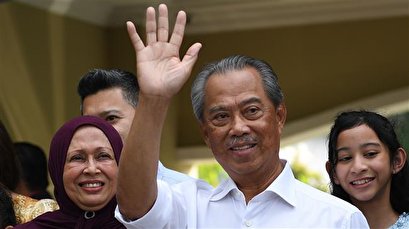 TEHRAN, Young Journalists Club(YJC)_The decision could again reshape politics in the Southeast Asian country less than two years after an alliance of Mahathir, and old rival Anwar Ibrahim, 72, swept out the former ruling party that had been tarnished by corruption scandals.

That former ruling party of six decades, the United Malays National Organization (UMNO), was among those that had rallied in support of Muhyiddin, along with the Islamist party PAS.

Although Mahathir and Anwar announced on Saturday that they had joined hands again, the palace said in a statement the king made his decision on the basis that Muhyiddin possibly had the support of a majority in parliament.

"His majesty has decreed that the process of appointing a prime minister cannot be delayed," it added. "This is the best decision for all."

Muhyiddin, 72, will be sworn in on Sunday.

"I only ask for all Malaysians to accept the decision announced by the national palace," Muhyiddin told reporters at his home.

Muhyiddin's position could still depend on being able to win a confidence vote in parliament.