US 2020 primary rigged against Sanders as it was against me in 2016: Trump 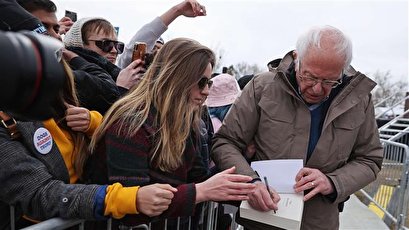 TEHRAN, Young Journalists Club(YJC)_"It's rigged against Bernie, there is no question about it," Trump told reporters at the White House before departing for a campaign rally in North Carolina on Monday.

He further claimed that the 2016 presidential election “was rigged against me.”

This is not the first time Trump has accused the Democrats of rigging the primary against Sanders, who also ran in 2016 but failed to win the party’s nomination, which subsequently led to former Secretary of State Hillary Clinton’s defeat against Trump.

“Ten days ago people were asking if Biden would even make it to Super Tuesday, and now 12 hours before polls open and three of his rivals drop out, two endorsed him, he picked up about a dozen congressional endorsements, a few senators and the former leader of the Senate Democratic caucus,” said Lily Adams, who ran communications for California Senator Kamala Harris’s presidential campaign. “It’s like the 12 days of political Christmas for Joe Biden wrapped up into the last 90 minutes.”