Just three weeks ago, Miguel Rodriguez was enjoying a pleasant life, working as a waiter in a Maryland restaurant in a job he held for 20 years. 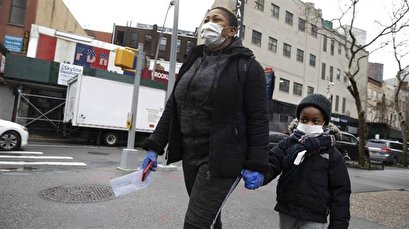 The American economy was going strong and he had a comfortable living situation.

Everything changed overnight when La Ferme, a French restaurant in the upscale Chevy Chase suburb of Washington, was forced to close amid statewide shutdowns to try to contain the coronavirus outbreak.

His wife, a waitress at another restaurant, also lost her job.

The pandemic instantly threw millions of US workers off the payroll and into poverty, in a crisis that is revealing and further exacerbating inequalities in the world's largest economy.

Low-income and middle-class households will be the first and hardest hit, and they have little in the way of savings.

"This is an extraordinary blow to millions of Americans who had barely recovered from the 2008 financial crisis," said Edward Alden, an expert at the Council on Foreign Relations.

Real wages took eight years to recover after the crisis, and had only accelerated for lower-paid workers in the past two years, he said.

Wages in 2019 rose at the fastest rate in 20 years partly thanks to some states increasing the minimum wage.