The White House and congressional Democrats said Sunday they could reach agreement soon on expanding funds to small businesses devastated by the coronavirus, with Democrats hoping to add money for hospitals, testing and state governments. 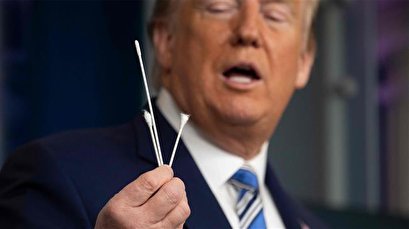 "We're going to work to expand that so that no one working in a small business in America would have to worry about missing a paycheck."

President Donald Trump has insisted his administration will do right by millions of American families and businesses ravaged by a pandemic that has infected 759,000 people nationwide, more than 40,000 of whom have died.

Later in the day Trump, too, said discussions were ongoing Sunday and "we are very close to a deal," but he said he could not guarantee when it might be concluded.

"When we open, we want to have those small businesses ready to go," he said. "We don't want those businesses abandoned because they couldn't afford their employees."

Treasury Secretary Steven Mnuchin expressed hope a final package could be reached and passed by Congress in the coming days.

"I think we're very close to a deal today," Mnuchin told CNN's "State of the Union", putting forward a new target number of $300 billion, beyond the $250 billion under discussion last week.

Mnuchin said the White House has also agreed to add $75 billion to hospitals and first responders, and $25 billion to ramp up virus testing -- clear wins for Democrats.

Critics have savaged the administration for lagging on testing efforts and say testing should be massively expanded, an essential for trying to safely reopen the economy.

Mnuchin, however, said Trump wants additional funding for state and local governments -- stretched to the limit as they battle the pandemic -- included in a broader bill to come later, not in the interim package.

Democrats joined the optimism about the pace of negotiations.

"We're on a very good path" and a deal could be reached soon, House Speaker Nancy Pelosi told Fox.

That marked a notable quickening of her timeline from last week, when she suggested the interim bill could clear Congress "before the end of the month."

US officials said Friday that the massive business loan program has aided 1.6 million enterprises to date.

Democrats are stressing that some money in the interim package should be set aside for businesses in rural and minority areas where there is often less access to banks.

The Paycheck Protection Program (PPP) was part of a massive $2.2 trillion stimulus bill passed late last month to spare the world's largest economy the worst effects of the pandemic.

Yet, unemployment data shows 22 million people have lost their jobs since mid-March.