Tehran 05 May_Human Rights Watch (HRW) says the Daesh terror group used a gorge in Syria’s northern city of Raqqah — the Takfiri outfit’s former stronghold in the country — as a dumping ground and mass grave for bodies of the people it had abducted and killed. 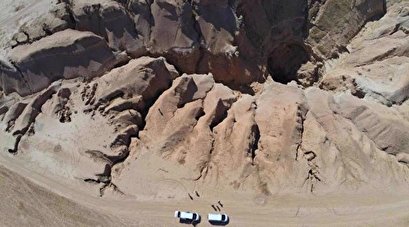 In a report released on Monday, the HRW urged authorities to remove the human remains from the al-Hota gorge located 85 kilometers (53 miles) north of Raqqah city and preserve the evidence for criminal proceedings against the murderers.

By flying a camera-equipped drone into the 50-meter-deep gorge, the rights group discovered the remains of at least six people floating at the bottom.

Based on the state of decomposition, the HRW said, the bodies were dumped there long after Daesh had left the area. The identities of those victims and their causes of death remain unknown.

According to the report, geological maps and a 3D topographic model of al-Hota from the drone imagery suggest that the gorge goes deeper than the drone was able to see; therefore, more human remains may lie below the water’s surface.

“Al-Hota gorge, once a beautiful natural site, has become a place of horror and reckoning,” Sara Kayyali, Syria researcher at HRW said.

“Exposing what happened there, and at the other mass graves in Syria, is crucial to determining what happened to the thousands of the people ISIS [Daesh] executed and holding their killers to account,” she said referring to the terror group.

The HRW investigation also involved interviews with local residents and a review of Daesh recorded videos in addition to the analysis of satellite imagery.