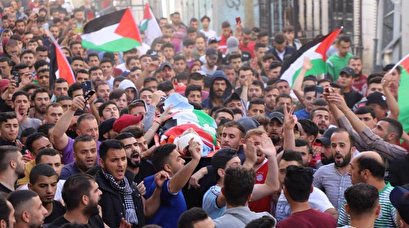 Later in the day, a funeral procession was held for the Palestinian teenager.

The Fawwar clashes, which also wounded five more Palestinians, came one day after an Israeli soldier was killed by a rock thrown at his head during an arrest campaign in the northern West bank town of Ya’bad.

In search of the perpetrator, Israeli soldiers once again raided Ya’bad on Tuesday evening, ransacked several houses, interrogated locals and rounded up at least a dozen people, including two whole families.

They also fired live ammunition, tear gas and stun grenades at the Palestinians during the clashes. One Palestinian was hit by a rubber-coated bullet in the foot and dozens were affected by tear gas.

The Israeli army further closed Ya’bad roads and placed a siege on the town.

Additionally on Tuesday, Israeli forces stormed the towns of Qalqilya, Abu Dis and Silwad as well as the Jerusalem al-Quds neighborhood of Silwan.

The Palestine Prisoners’ Society (PPS) said a total of 33 Palestinians had been detained in multiple Israeli raids across the West Bank.

In a separate incident on Tuesday, a Palestinian youth was injured by Israeli gunfire and detained near the military checkpoint of Qalandiya, north of Jerusalem al-Quds.

Tensions have been running high in the occupied territories amid plans by Israeli Prime Minister Benjamin Netanyahu’s new coalition administration to impose Tel Aviv’s “sovereignty” over Israeli settlements and the strategic Jordan Valley in the occupied West Bank.

US President Donald Trump’s self-proclaimed “deal of the century,” which was unveiled in January, effectively granted Israel a green light for the annexation in flagrant violation of international law.

The latest of wave of clashes comes as US Secretary of State Mike Pompeo is in the occupied territories for high-level talks with Israeli officials over the annexation scheme, among other topics.

This is while the Palestinians, along with other Muslims, are gearing up to mark the International Quds Day to reiterate their call for the liberation of their homeland from Israeli occupation.