Pompeo in Israel to talk annexation as Palestinian rage boils over

Wednesday, 13 May _The US secretary of state is in the Israeli-occupied territories to discuss Tel Aviv’s plan to annex Palestinian land under a controversial plan by US President Donald Trump, among other topics. 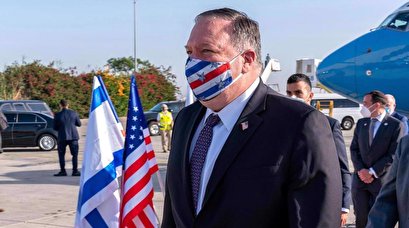 Mike Pompeo arrived in Israel on Wednesday on his first foreign trip since Washington began enforcing a lockdown against the new coronavirus outbreak.

Shortly after arrival, he held a meeting with Israeli Prime Minister Benjamin Netanyahu, who is scheduled to be sworn into office again on Thursday. The top US diplomat is also set to sit down for talks with opposition leader Benny Gantz.

Pompeo had earlier outlined the talking points of the meetings in remarks to Israel Hayom daily. “This meeting is important enough to hold face to face,” he said.

In a statement alongside Pompeo, Netanyahu claimed the new Israeli administration presents an opportunity “to promote peace and security based on the understandings I reached with President Trump in my last visit in Washington.”

In turn, Pompeo voiced support for Israel’s atrocities in the occupied Palestinian territories, saying the regime had the “right to defend” itself.

Prior to his arrival, clashes broke out between Palestinian protesters and Israeli forces in the occupied West Bank. A Palestinian teenager was killed amid the skirmishes in the city of al-Khalil (Hebron).

In January, Trump outlined the main points of a self-styled plan for the Palestinian-Israeli conflict. The Palestinians have already rejected what Trump has called the “deal of the century.”