Hamas has categorically rejected all projects aimed at undermining the Palestinian people's rights and their cause, stressing that the much-condemned US "peace" proposal and Israel's annexation plans are atop of these schemes. 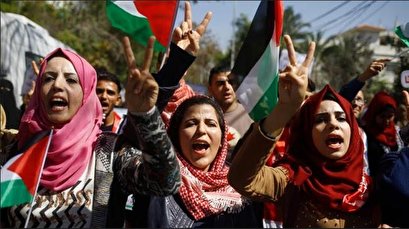 In a statement on Thursday and on the eve of the 72nd anniversary of Nakba Day (the Day of Catastrophe), Hamas stressed the Palestinians' right to resist the Israeli occupation with all means possible, including armed resistance as a strategic choice to defend themselves and restore their usurped rights.

On this day back in 1948, hundreds of thousands of Palestinians were forcibly evicted from their homeland and Israel proclaimed existence.

“Hamas venerates the national unity and for its sake, it has made many concessions and showed a lot of flexibility,” the movement said, reiterating its adherence to the national unity option as a vital factor to boost the national front in the face of Tel Aviv's occupation and plots.

In the statement, carried by the Palestinian Information Center, Hamas saluted all Palestinians at home and abroad and urged them to widely and actively participate in all events to be organized to commemorate the Nakba Day.

US President Donald Trump officially unveiled his scheme, the so-called deal of the century, in January at the White House with Israeli prime minister Benjamin Netanyahu on his side, while Palestinian representatives were not invited.

The proposal meets Israel’s demands while creating a Palestinian state with limited control over its own security and borders, enshrining the occupied Jerusalem al-Quds as “Israel’s undivided capital” and allowing the regime to annex settlements in the West Bank and the Jordan Valley.

The highly provocative proposal, which further denies the right of return for Palestinian refugees to their homeland, is also in total disregard of UN Security Council resolutions and opposed by the vast majority of the international community.

Netanyahu, who is facing a number of criminal indictments, has repeatedly stressed that he would start plans for annexing more areas in the occupied West Bank on July 1, in accordance with Trump’s scheme, further infuriating Palestinians.