Trump says he is taking hydroxychloroquine despite FDA warning

Tehran, 19 May_US President Donald Trump has made the surprising revelation that he is taking hydroxychloroquine, an anti-malaria drug that his own government experts say is not suitable for fighting the novel coronavirus. 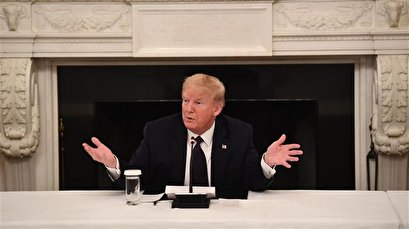 Trump, noting that he has tested negative for the virus and shows no symptoms, said he'd been taking the drug "for about a week and a half."
"I take a pill every day," he said on Monday, adding that he also takes zinc as a preventative measure.

Asked why, he said "because I think it's good. I've heard a lot of good stories."

Trump has often played down the dangers of coronavirus, including last week when he said it threatened only a small number of people. He has also pointedly refused to wear a mask, despite federal recommendations and the fact that most of his staff have taken to covering their faces in public.