Tehran, 27 May_Tehran’s envoy to Caracas says Iran and Venezuela said no to the US on behalf of the whole world by ignoring the American sanctions and engaging in free trade, stressing that Washington is no longer in a position to tell other states what to do. 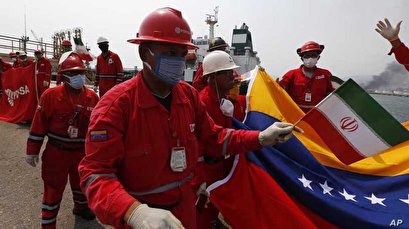 Hojatollah Soltani told Al Mayadeen TV channel on Wednesday that Iran’s successful shipment of fuel to the South American state — which was the first of its kind — was an achievement not only for Tehran and Caracas, but also for the entire world.

Iran has sent five tankers loaded with 1.53 million barrels of gasoline and alkylate to Venezuela to help jump start the oil refineries in the Latin American state amid a fuel crisis.

Three of the vessels — Fortune, Forest and Petunia —  have already reached Venezuela under military escort.

The fourth tanker Faxon entered the Caribbean Sea on Wednesday while the last ship, Clavel, is en route to Venezuela.