TEHRAN, 30 May_The mayor of the US city of Minneapolis has declared a strict curfew following three nights of violent protests over the death of a handcuffed black man in police custody. 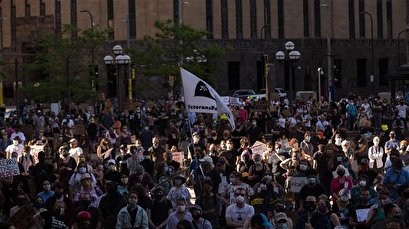 Mayor Jacob Frey ordered everyone off the city's streets starting at 8 pm (0100 GMT Saturday) until 6 am, excepting law enforcement, fire and medical personnel and national guard troops deployed for peacekeeping.

They can face up to 90 days in jail and a one-thousand dollar fine if they go out at night.

"Being black in America should not be a death sentence," Frey declared at a news conference.

Governor calls for an end to violent protest

Earlier on Friday, the governor of the state of Minnesota called for an end to the violent protests that have rocked Minneapolis.

Tim Walz said he expects “swift” justice for the officers involved in the incident, as angry protests against police brutality rage on for a third night across the US.

He also vowed to address the racial inequities behind the unrest as the demonstrators set cars, buildings and a police precinct ablaze to show their anger at the killing of George Floyd, a black man who was filmed crying out for help as a white police officer pinned him to the ground with a knee to his neck.

The 46-year-old black man died on Monday. A video went viral showing him gasping for breath as a white policeman knelt on his neck. The killing has added to longstanding anger over police brutality against black Americans in the US.

"We have to restore order to our society before we can start addressing the issue," Walz told reporters, referring to racial discrimination against African-Americans across the United States. "We cannot have the looting and recklessness that went on."

"The National Guard has arrived on the scene. They are in Minneapolis and fully prepared. George Floyd will not have died in vain. Respect his memory!!!" US President Donald Trump tweeted.

More than 500 Guard members were activated and sent to Minneapolis and several surrounding cities. It was the first time the Minnesota National Guard has been activated for a civil disturbance in 34 years.