Tehran, 03 June_The grieving mother of George Floyd's daughter on Tuesday demanded justice for him, saying he was a good father who did not deserve to die face down on the pavement, pinned under the weight of three police officers. 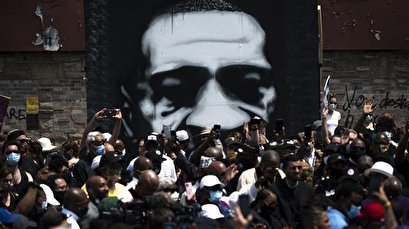 With her 6-year-old daughter Gianna clinging to her, Roxie Washington told reporters she wants all four officers involved in Floyd's death to pay for the killing, which has sparked protests across the US and the world.

"At the end of the day, they get to go home and be with their families," Washington said. "Gianna doesn't have a father. He will never see her grow up, graduate. He will never walk her down the aisle."

As Washington made her remarks during a brief news conference inside Minneapolis City Hall, Gianna, dressed in a white shirt, tennis shoes and light blue jeans clung to her mother, at times with a frown on her face.

"Why do we have to see her pain? I am here to get justice for my brother ... and somehow, god dammit, we are going to get it," Jackson said, his voice echoing through the marble and stone rotunda. "It has to stop."