The UN Security Council on Sunday opened urgent talks on the escalating violence in Gaza, stepping up ceasefire efforts after more than 100 Palestinians died in a single day. 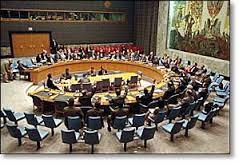 Palestinian president Mahmud Abbas had called for the emergency session, saying the "situation is intolerable" in Gaza and describing Israeli attacks as a "crime against humanity."
The 15-member Council met as UN Secretary-General Ban Ki-moon was holding talks with leaders in the region amid a spike in violence that killed more than 100 Palestinians in one day.
"We have to know from the secretary-general the result of his efforts, his travels and whether there is any hope of moving forward to a ceasefire," said French Ambassador Gerard Araud as he headed into the meeting.
More than half of Sunday's Palestinian victims were killed in a blistering hours-long Israeli assault on Shejaiya, near Gaza City, which began before dawn and has so far claimed 62 Palestinian lives, with another 250 wounded.
"A heinous massacre has been committed against our people in the Gaza Strip this morning," said the Palestinian representative to the United Nations, Ryad Mansour.
"There is no justification for this massacre committed against our people."
The Palestinian envoy called on the top world body to take decisive steps to end the violence, and voiced frustration with what he termed as the Council's failure to take a strong stand.
"The Council failed again and again to shoulder its responsibility," Mansour told reporters.
"We are coming back, knocking on the door of the Security Council to shoulder its responsibility and stop this massacre against our people," he said.
It's going to last': Israel
============================
Israeli Ambassador Ron Prosor shot back, saying that Israel had agreed to ceasefire offers from Egypt and was acting in self-defense.
"It is going to last as long as (until) Hamas stops firing indiscriminately at Israeli cities," he told reporters.
The Council's 15 members held a meeting on Gaza Friday but failed to reach agreement on a joint declaration. Diplomats said no formal statement was expected to emerge from the talks on Sunday, which were requested by Jordan.
Since the conflict began on July 8, the Council also held a first inconclusive meeting on July 10 before calling for a ceasefire in a unanimous declaration.
Ban, whose envoy negotiated a brief humanitarian truce last week, is in Doha as part of a Middle East tour to push truce efforts.
He condemned the "atrocious action" in Shejaiya and urged Israel to "exercise maximum restraint."
"Too many innocent people are dying... (and) living in constant fear," Ban told a news conference in Doha.
So far, truce efforts have been rejected by Hamas which has pressed on with its own attacks, undaunted by the Israeli bombardment by land, sea and air.
In the early hours of Monday Israeli jets carried out strikes throughout Gaza, including in southern Rafah and Khan Yunis and northern Beit Lahiya.
The current round of conflict began on July 8, with Israel announcing on July 17 that it would undertake ground operations in Gaza.
Israel's UN ambassador also denied that an Israeli soldier had been abducted by Hamas militants, prompting celebrations in the streets of Gaza City.
"Those rumors are untrue," said Prosor.
AFP
Share to
Tags
Security Council ، UN ، Gaza ، Israel
Your Comment