Sunday, 05 July_A massive blaze sprawling at a power plant in southwestern Iran has been brought under control after two hours of decisive endeavor by local fire fighting personnel. 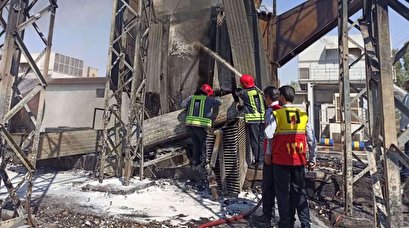 Zergan Power Plant, located by the road that connects the cities of Ahvaz and Masjed Soleyman in Khuzestan Province, caught fire on Saturday after an explosion hit the station's transformer, IRNA reported.

The blaze broke out at the facility at 15:30 local time (1200 GMT) and was controlled two hours later, said Ebrahim Qanbari, head of Ahvaz Municipality’s Fire Fighting and Safety Service’s Organization.

The cooling operation is yet underway, the official said.

The incident came as the city is experiencing extreme temperatures, with the mercury shooting up as high as 47 °C (116 °F).

Also known as Shahid Mod'hej, the power station has been built upon 45 hectares of land. Its nominal capacity for producing electricity stands at 418 megawatts.

The power station’s first unit was set up in 1976 by the General Electric Company, while its second unit was operationalized in 1993 several years following the victory of Iran’s Islamic Revolution.