Wednesday, 08 July_China says the United States holds the key to breaking the stalemate in negotiations with North Korea, amid renewed tensions on the Korean Peninsula due to stalled demilitarization talks. 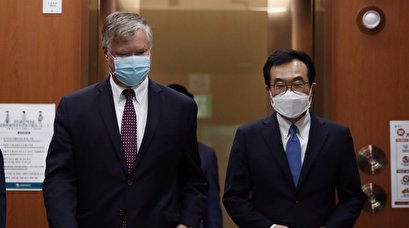 “North Korea and the US are major conflicting parties in regards to the Korean Peninsula issue. The US holds the key to breaking the current deadlock,” Chinese Foreign Ministry spokesman Zhao Lijian said in a press briefing in Beijing on Wednesday.

“As China has stressed many times, we should not only talk about the issue but also act on it. The US side should show sincerity and take concrete actions to respond to North Korea’s legitimate and reasonable concerns,” Zhao said.

Pyongyang has refused to return to denuclearization talks with Washington because the US refuses to relieve any of the harsh sanctions that it has imposed on the North over the years.

Earlier in the day, US Deputy Secretary of State and chief negotiator with North Korea Stephen Biegun rejected reports that he was seeking to meet with North Korean officials during a visit to South Korea this week.

He said he was only visiting “our close friends and allies, the South Koreans.”

But he said Washington was open to resuming talks at any time Pyongyang decides.

South Korean chief negotiator Lee Do-hoon also said Biegun had reaffirmed that the United States was willing to be flexible and reach a “balanced agreement” with North Korea if it decided to return to talks.

Biegun arrived for wide-ranging talks in Seoul on Tuesday. The visit triggered speculation in the South that Washington was trying to revive diplomacy with Pyongyang ahead of the US presidential election in November.

Hours before his arrival, North Korea stressed that it had no intention of holding new negotiations with the United States.