Tuesday, 14 July 2020 _The photos of only some of the nurses, doctors and social care assistants who sacrificed their lives to save those of others. Brave human beings at the frontline of the battle against the deadly novel coronavirus. 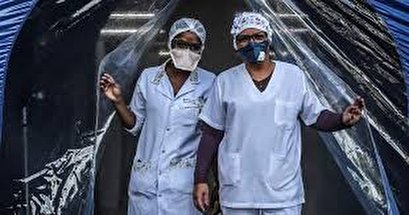 Health and social care workers often face greater exposure to the disease, and therefore are at greater risk of getting infected and dying, a fact exacerbated by a lack of adequate protection. Most affected in this country, those who identify as Black, Asian and Minority Ethnics.

And a survey by the British Medical Association in May, found that almost half of doctors working for the NHS, the UK’s National Health Service, came up with their own equipment or relied on donations when none was available.

But why such a high number in the UK compared to other nations? According to Amnesty, that’s because the UK is one of few countries that distinguish between the deaths of social care workers and healthcare workers.

The UK government says it’s provided healthcare workers with some two billion data-x-items of PPE, and ordered another 28 billion to ensure a continuous supply to those on the front line. This as Amnesty international says the crisis is far from over and an independent inquiry into the British government’s handling of the pandemic is urgently needed.