We will chase Zionists house by house to redeem Palestinian bloods

Tehran, YJC. Second in Command of the IRGC has made novel remarks about the recent Israeli attack on Gaza. 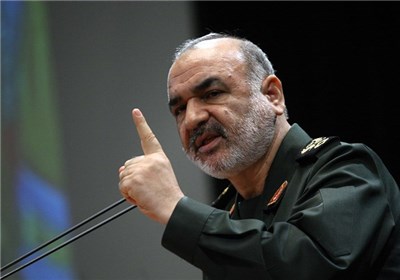 Second in Command of the IRGC Brigadier General Hossein Salami who was speaking before people demonstrating on the occasion of the Quds day in Tehran said "The Zionist regime has gradually prepared the ground for its own annihilation.”

Severely criticizing Arab states for their silence against the ongoing attacks he said "Some governments ruling Islamic or Arab countries in neighborhood with the Zionist regime would hear the cries of the Palestinian children dying in their mothers’ arms, but they have got ears that cannot hear.”

"Some Arab rulers are htose who are using their entire money and weaponry along the American policy to weaken the resistance currents around the Zionist regime. They have made a great nation such as that of Syria homeless. The flow of their weapons and terrorist forces is going down under the name of Daesh and other terrorist groups to Iraq and Syria,” the IRGC second in command maintained.

"No spot in the Zionist regime is safe any longer. We warn the Zionists ‘You are a rootless society. You own neither of the things that make up a country’s identity, neither land, nor race, history or other building blocks. You are rather a rootless tree planted in the occupied lands by the British,” he asserted.

Hossein Salami further addressed the Zionists and said "We will chase you house by house and redeem the blood of our Palestinians martyrs by the drop. Palestine will stand still no longer. At last the Islamic world will make up the cemetery for American policies and the Zionist regime and their reactionary supporters.”