Protests in Portland enter 60th day with no sign of stopping

Tuesday, 28 July 2020_Portland marked the 60th consecutive day of anti-racism protests on Sunday with yet another clash between protesters and authorities near the city's federal courthouse. 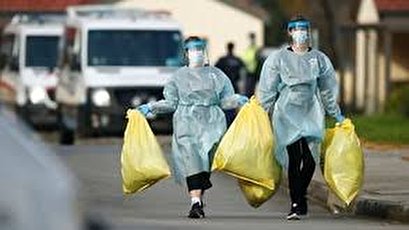 Hundreds of protesters were seen gathering outside of the courthouse around 22:30. Demonstrators chanted slogans, and waved message boards calling the federal agents dispatched by President Donald Trump to leave.

Some protesters outside the courthouse told the press they will not stop until they have justice for those who died of alleged police brutality, like 26-year-old Breonna Taylor, who was shot dead by police in March.

Approaching midnight, lights suddenly went up outside the courthouse, with a warning from the loudspeaker demanding protesters to disperse. As no one seemed to comply with the order, law enforcement personnel emerged from the courthouse and fired tear gas at the protesters.

With still a large presence of protesters at the scene, more warnings were announced and three more rounds of tear gas were fired. Protesters were seen trying to block tear gas shells with umbrella by the fence of the courthouse, and one Molotov cocktail was tossed over to the law enforcement officers.

Around 01:20 past midnight federal officers came out on the streets and broke up the protesting crowd. Multiple protesters were arrested. The situation however soon returned to a standoff between the two sides.

The sound of blasts continued in downtown Portland until about 02:30 in the morning.