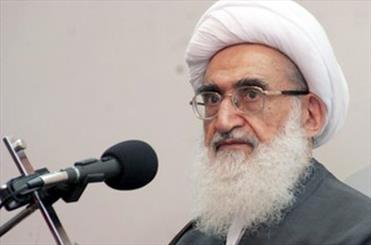 Ayatollah Hossein Nouri Hamedani who was speaking in the sidelines of the pro-Palestinian demonstration of Friday said "The first message to the arrogant world and to the US and some Islamic countries which follow them is to let them know that the US President’s blatant endorsement of the Zionist regime has revealed their nature to the world.”

He further said "The second message of this demonstration relates to Muslims and freedom-lovers around the world who must always be on the stage and ban Israeli products.”

"People have grown conscious and it is about time the supporters of the Zionist regime are thrown off their arrogant seats,” the clergy maintained.

Addressing Muslims around the world he said "Islamic countries have to call their ambassadors to [Israel] home in order to help this tumor vanish,” adding "Israel is a tumor which must be removed. We thank all those who support the people of Palestine.”

He added "The people of Palestine have to be strong and know that we stand by them all the time. We will not leave them by themselves. Muslims will stand side by side them until the final objective is gratified, which is to eradicate the tumor of Israel.