Dov Lior, the rabbi of the settlement of Kiryat Arba, has issued a religious ruling permitting the total destruction of Gaza if Israel’s military leaders deem it necessary. 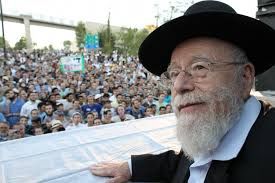 Lior is considered one of the more extreme rabbis on the religious right. In his ruling, he wrote that the Torah also teaches Jews how to act during wartime. In any war in which the people are under attack they are permitted to fight back against the nation from which the attackers come, he wrote.
"Therefore, in a time of war, the attacked nation is permitted to punish the enemy population with whatever measures it deems proper, like blocking supplies or electricity. It may bomb the entire area based on the judgment of the war minister and not wantonly put soldiers at risk,” Lior wrote, adding that "deterrent measures to exterminate the enemy” were allowed.
"The defense minister may even order the destruction of Gaza so that the south should no longer suffer, and to prevent harm to members of our people who have long been suffering from the enemies surrounding us,” he wrote.
After the ruling was published, the head of a left-wing party, Meretz’s Zahava Gal-On, asked Attorney General Yehuda Weinstein to launch an investigation.
"Rabbi Dov Lior’s racist comments long ago lost the protection of the right to free expression,” Gal-On wrote to Weinstein. "These remarks follow his racist comments through the years, among them his many comments before the murder of [Yitzhak] Rabin and support for Baruch Goldstein,” the man who gunned down 29 Muslim worshippers in Hebron in 1994.
haaretz
Share to
Tags
Dov Lior ، rabbi ، Gaza
Your Comment