Wednesday, 05 August 2020_Tehran has begun sending food supplies and medical aid to Lebanon, with senior Iranian officials voicing readiness to provide all sorts of humanitarian assistance to Beirut, which is reeling from a massive explosion. 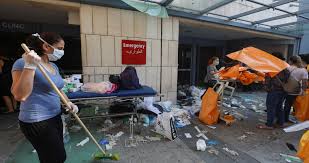 The first consignment of Iranian aid supplies arrived in Beirut hours after the tragedy on Tuesday. Two more shipments are expected for delivery later on Wednesday.

The Iranian team will also set up a Rapid Deployment Hospital (RHD) in Beirut, he added.

At least 100 people are so far confirmed to have lost their lives, while around 4,000 others were injured in the powerful explosion that ripped through the Beirut port on Tuesday.

The number of fatalities and those wounded is expected to rise as search and rescue operations are still underway.