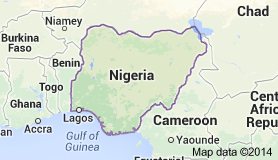 The two mosques in the town of Potiskum in Nigeria’s Yobe State were targeted by bombers late Tuesday. Eyewitnesses blamed the Takfiri Boko Haram terrorists for the deadly attacks.
The first blast rocked an open-air mosque belonging to Shia followers of Islam in the Dogo Tebo area of Potiskum at about 7:55 p.m. (1855 GMT), leaving four people dead, AFP reported.
The second explosion reportedly went off five minutes later at a mosque in the town’s Anguwar Bolawa area, in the compound of the chief imam, killing at least two worshippers.
Witness Balarabe Dahiru was cited in the report as saying that a bomber "we believe was from Boko Haram blew himself up at the open air mosque used by Shias which they name Saqafa shortly after saying their evening prayers there.”
"We took four dismembered bodies of the victims to the hospital along with five others who were injured,” said Dahiru, who was sitting outside his house when the blast took place.
Another local resident, identified as Awwal Maikusa, also offered a similar account, adding that a second blast occurred five minutes later.
"They are obviously the handiwork of Boko Haram,” Maikusa said of the two bombings.
The Takfiri militants have carried out many attacks on Christians and Muslims in northeastern Nigeria. Boko Haram militants also kidnapped over 200 schoolgirls in April.
Potiskum, Yobe state’s commercial hub, has been the scene of repeated deadly Boko Haram attacks in the past four years although they became fewer over the recent months.
Share to
Tags
Shia ، mosques ، bombed ، Nigeria
Your Comment