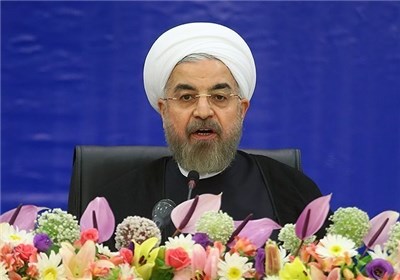 Hassan Rouhani speaking to the NAM Palestine Committee convening on Gaza in Tehran on Monday said "I have to regret to say that in the last weeks during Ramadan the Zionist regime has violated human and international principals, human rights and international humanitarian rights in special, by using the most modern weapons in an unjust war to subject the land of Palestine and the Gaza Strip to its severest and most ruthless attacks.”

"Under such circumstances, a conspicuous lethargy, sort of passive reaction by the international community, the UN Security Council in particular, in pressurizing the Zionist regime to stop its anti-humanitarian crimes has made the regime bold enough to intercept humanitarian aids from food to drugs and medical equipments to Gaza,” Rouhani maintained.

The President stated that to show swift reaction to such blatant violations is the reason for the NAM Palestine Committee to convene, adding "The Non-Aligned Movement enjoys a lot of power as an international foundation. It can, and it should, work toward real peace and social justice in order to meet the undeniable rights of the oppressed Palestinian nation.”