WASHINGTON, Aug 06, 2014 (AFP) - The international community is moving toward issuing an ultimatum to the parties in South Sudan's civil war raging since 2013, Secretary of State John Kerry warned Tuesday. 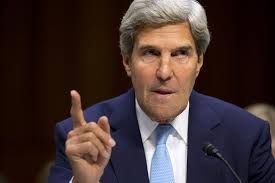 Washington is trying to impress upon South Sudanese President Salva Kiir the need for an agreement in a new round of peace talks aimed at ending his country's civil war.
On the sidelines of the US-Africa Summit, Kerry met with Kiir and the regional bloc brokering the talks, IGAD -- Ethiopia, Kenya, Djibouti and Uganda.
"There is a unanimous agreement that this war must end and must end now.  These leaders will go back to their region and meet in Addis Ababa very, very soon, where they will decide on specific actions that they are prepared to take in unanimous fashion with their countries in an effort to guarantee that the war comes to an end.
Kerry said the ultimatum would likely follow a UN Security Coucnil visit.
"They are prepared to issue a final ultimatum to the parties to come to the table, and in addition to that, the United Nations Security Council will be visiting - the entire Security Council - next week to make it clear there is no other alternative except to proceed with the plan of these leaders that they have put on the table," he stressed.
The last round of peace talks between Kiir and his former deputy Riek Machar stalled in June with each side blaming the other for the failure.
Thousands of people have been killed and over 1.5 million have fled more than seven months of fighting between government troops, mutinous soldiers and ragtag militia forces divided by tribe.
Aid agencies have warned of the likelihood of famine within weeks if fighting continues.
AFP
Share to
Related News
Djibouti seizes control of Dubai-run Doraleh port
Tags
South Sudan ، ultimatum ، Kerry
Your Comment