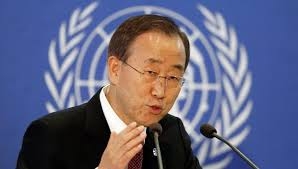 Ban "calls upon all Iraqi political parties to abide by the constitutional timeline that governs the nomination of the Prime Minister," his spokesman said in a statement.
"He also calls for reason and wisdom to prevail and urges all leaders in Iraq to form a broad-based government that is acceptable to all components of Iraqi society."
"Such a government should be able to mobilize the nation to confront the threat from the Islamic State (IS) in a way that will bring security and stability to the whole country."
Iraq's parliament has been deadlocked on chosing a new prime minister following elections in April.
Shiite Prime Minister Nuri al-Maliki, who came to power in 2006, has vowed to seek a third term after his coalition dominated the vote, but Iraq's minority Sunni Arabs and ethnic Kurds -- and even some fellow Shiites -- have demanded his replacement.
The speedy formation of a more inclusive government is seen as a crucial step in countering the onslaught by Islamic State militants, who have exploited resentment stoked by Iraq's ineffectual and fractious political leaders.
Ban also "remains deeply concerned about the evolving humanitarian and security situation in Iraq," he said, adding that the United Nations "and the international community are also closely watching political developments" in Iraq, the statement read.
Share to
Tags
Ban Ki Moon ، Iraqi ، politicians ، government
Your Comment