Iranian music icon to perform in the States 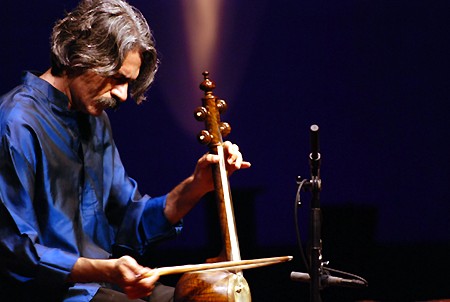 Kalhor is slated to perform at Mason District Park Amphitheater hall on August 22, 2014.
An Indian Tabla player is also to accompany the world-renowned Iranian musician Kalhor, Press TV reports.
Iranian Kamancheh maestro Kalhor has recently held his 2014 concert tour in several European countries.
The tour was held in Budapest in Hungary, Paris in France and Yorkshire’s National Center and several other cities in England where the Iranian Santur maestro Ali Bahramifard joined Kalhor.
Kalhor is known for his brilliant performances on the traditional instrument of Kamancheh and creating a unique mixture of classical Persian music with folk tunes of the Kurdistan region.
He has toured internationally and performed in many countries on numerous occasions. Two of his works were nominated for Grammy Awards in 2004.
He has also held many concerts along with the world-renowned musicians and ensembles such as the string quartet, Brooklyn Rider ensemble, in the US city of Minneapolis in 2012.
Kalhor has composed and performed with Indian sitar player Shujaat Husain Khan and Indian Tabla player Swapan Chaudhuri, with whom he formed Ghazal ensemble.
Kalhor also presented joint programs with the veteran Turkish Baglama player Erdal Erzincan at the New York’s GlobalFest held at the city’s Marlin Room on January 13, 2013.
He also performed introspective performances with a number of world-class Asian musicians at BT River of Music in the British capital of London.
Kamancheh, a Persian bowed string instrument, is related to the bowed rebab, its historical ancestor and also the bowed lira of the Byzantine Empire, ancestor of the European violin family.
Share to
Tags
kayhan ، kalhor ، music ، kamancheh ، concernt ، usa
Your Comment