Talking with US will not mollify them: Leader

Tehran, YJC. Supreme Leader says talks are useless because they are not going to diminish US enmity with Iran. 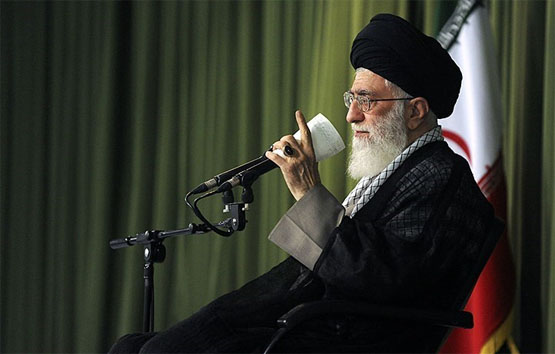 The Supreme Leader of the Islamic Republic of Iran speaking to the country’s ambassadors and charges d’affaires on Wednesday said "The diplomatic department is the front line in defending Iranians’ national interests and properties.”

"A sophisticated, active diplomacy can bring many political, economic, human, and social benefits which could not be attained with anything such as costly, risky wars. This shows how important diplomacy is in a country’s management put together,” ayatollah Khamenei stated.

"Despite some interpretations, heroic flexibility has a clear meaning an example of which is evident in wrestling competitions where the aim is to beat the contestant. If one is powerful but does not have the flexibility he needs in due time, he is sure to be beaten, but if he uses power and flexibility duly he will do the rival,” he asserted.

Maintaining that the world is moving toward a novel arrangement of powers he said "Besides the traditional acting agents, there are new players in Asia Africa, and Latin America who have showed up on the stage and are trying to make a place for themselves in this new order.”

Also referring to President Rouhani’s Monday speech where he emphasized the need to talk with the world as part of a successful diplomacy, the Supreme Leader stated "There are two exceptions there, the Zionist regime and the US.”

"Not only is there no benefit in talking to the US, there is rather harm in it, except for special cases. Who can find a sane person pursuing some pointless business?” he demanded.

Ayatollah Khamenei further maintained "There were some who would presume that if we sat at the negotiation table with Americans many problems would have been solved. Of course we knew that that would have not happened. But what happened in the past one year testified to the fact for the nth time.”

"In the past there used to be no contact between our statesmen and those of the US. But in the past year due to the sensitivity of the nuclear case and the experience which was suggested to be tried, it was decided that contacts and meetings should be held at the level of Foreign Ministers. But such contacts had no benefit; they rather lead to Americans adopting harsher tones and making more egoistic demands in negotiations and on public tribunes,” he added.