Hungarian Prime Minister Viktor Orban criticized sanctions against Russia.
The European Union has harmed itself economically with the sanctions it imposed on Russia over Ukraine, Hungarian Prime Minister Viktor Orban said on Friday, calling for a rethink.
Orban's remarks came a day after his Slovak counterpart, Robert Fico, criticized the sanctions as "meaningless," saying they would threaten economic growth in the 28-member bloc. 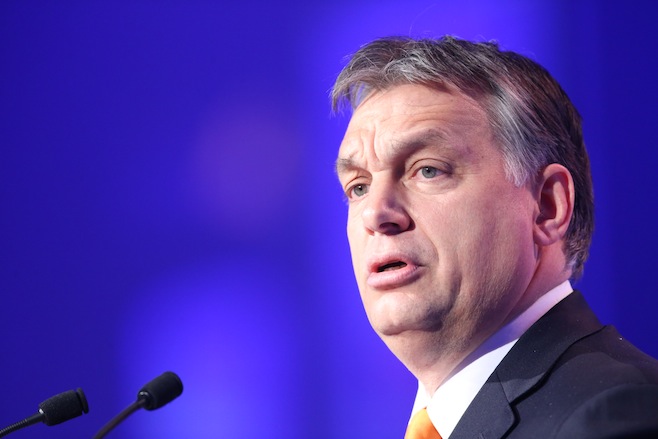 Hungarian Prime Minister
"The sanctions policy pursued by the West, that is, ourselves, a necessary consequence of which has been what the Russians are doing, causes more harm to us than to Russia," Orban said in a radio interview. "In politics, this is called shooting oneself in the foot."
Export-driven Hungary is heavily reliant on energy imports from its former Communist overlord and early this year Budapest agreed with Russian power firm Rosatom to expand Hungary's only nuclear plant in a 10 billion euro ($13 billion) deal.
Russia is also Hungary's largest trading partner outside the European Union, with exports worth 2.55 billion euros ($3.4 billion) in 2013.
"The EU should not only compensate producers somehow, be they Polish, Slovak, Hungarian or Greek, who now have to suffer losses, but the entire sanctions policy should be reconsidered," Orban said.
EU foreign ministers are holding an emergency meeting on Friday to discuss conflicts in Ukraine and Iraq.
Orban had already signaled opposition to economic sanctions against Russia for fear of damaging the domestic economy. On Friday, he said he would seek ways to facilitate a rethink.
"I will do my utmost — of course we are all aware of Hungary's weight, so the possibilities are clear — but I am looking for partners to change the EU's sanctions policy, which I think has not been considered thoroughly enough," he said.
Hungary's Agriculture Ministry said on Tuesday that farming exports would not be harmed significantly by a Russian import ban on a range of foods from the EU.
It said the banned products account for less than 30 percent of Hungary's agricultural exports to Russia and only one percent of its total farming exports.
Amid weaker growth in the EU's east, Hungary was among the bright spots, with Thursday's preliminary GDP figures in Slovakia, Bulgaria and Hungary all better than expected, led by the latter's 0.8 percent quarterly expansion.
*Moscow Times
Share to
Tags
Hungary ، EU ، sanctions ، Russia ، Viktor Orban
Your Comment