Logs released under the Freedom of Information Act have reinforced claims that the UK lobbied to keep its role in the CIA's torture and interrogation programme out of what is expected to be a damning Senate report.
They show that the UK ambassador to the US met members of the Senate select committee on intelligence 11 times between 2012 and 2014 – as they were investigating the CIA's rendition programme. This included two meetings with the committee's chair, Diane Feinstein, which took place as crucial decisions were being made regarding how much of its report into the programme should be made public. 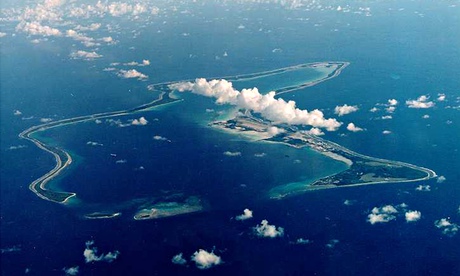 The revelation has prompted fresh concern that the government lobbied for key parts of the report referring to Diego Garcia, a British territory in the Indian Ocean leased to the US as a military base, to be redacted. Human rights groups believe that the territory played a key role in facilitating the CIA's extraordinary rendition programme – the movement of high-value terrorist suspects to "black sites" around the world without legal oversight.
The US authorities have confirmed only that the territory was used for two refuelling stops. But there are suspicions Diego Garcia has played a more extensive role than the US has so far admitted, raising questions about when and what the UK knew about its use.
The release of the report on the torture and rendition programme has been delayed after the Democrats criticised what they claimed were excessive redactions made by the CIA. Sources suggest that the spy agency wanted as much as 15% of the report blacked out.
Former foreign secretary William Hague confirmed in a recent letter to the human rights group Reprieve that the UK government had discussed the report with the US, prompting concerns it had pushed for sections relating to Diego Garcia and possible other British involvement to be blacked out.
"We have made representations to seek assurances that ordinary procedures for clearance of UK material will be followed in the event that UK material provide[d] to the Senate committee were to be disclosed," Hague explained.
Now the newly released logs reveal that UK ambassador Peter Westmacott met Feinstein on 29 April and 2 May this year, Senator Martin Heinrich on 16 July, and Senator Marco Rubio on 26 March 2014. The timing of the meetings appears significant. The committee voted to declassify its report's summary and conclusions on 3 April this year, succeeding by 11 votes to three. Rubio voted against. Mid-April also saw numerous stories appear in the world's press relating to Diego Garcia and the CIA's rendition programme.
The ambassador met Rubio last year on 1 February and 10 April, Senator Saxby Chambliss on 20 November 2012, Senator Mark Warner on 11 January 2013, Senator Susan Collins on 16 July and 25 July 2012, and Senator Jay Rockefeller, the then chair, on 28 June 2012.
There were also at least 11 meetings between Britain's then ambassador, Nigel Sheinwald, and members of the committee between 2009 and 2011, commencing shortly after the committee voted by 14-1 to investigate the rendition programme.
"This is yet more evidence of the desperate attempts being made by the UK to censor the Senate's report on CIA torture," said Reprieve's executive director, Clare Algar. "We already know that our government was up to its neck in the CIA's programme of rendition and torture – making it highly likely that the Senate's report will contain information which is deeply embarrassing for them. But simple embarrassment is not a justification for suppressing the truth. Ministers must change course and instead support the publication of this crucial report in the most open and transparent form."
Confirmation that a British territory was involved in extraordinary rendition could leave the government vulnerable to legal action. Last month the European court of human rights ruled that the Polish government had actively assisted the CIA's European "black site" programme.
* Guardian
Share to
Tags
UK ، ambassador ، senators ، Diego Garcia ، rendition
Your Comment