Tuesday, 06 October 2020_Britain’s Roger Penrose, Reinhard Genzel of Germany and American Andrea Ghez won the 2020 Nobel Prize for Physics on Tuesday for their discoveries about one of the most exotic phenomena in the universe, the black hole. 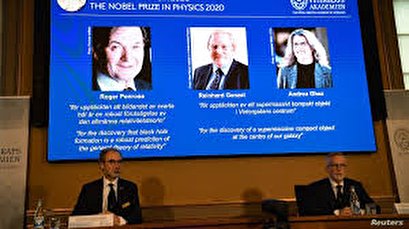 Penrose, professor at the University of Oxford, won half the prize of 10 million Swedish crowns ($1.1 million) for his work using mathematics to prove that black holes are a direct consequence of Albert Einstein’s general theory of relativity.

Ghez - only the fourth woman to be awarded the Physics prize after Marie Curie in 1903, Maria Goeppert-Mayer in 1963 and Donna Strickland in 2018 - said she hoped it would inspire others.

Asked about the discovery of a massive yet invisible object at the heart of the Milky Way, Ghez said “the first thing is doubt.”

“You have to prove to yourself that what you are really seeing is what you think you are seeing. So, both doubt and excitement,” the 55-year-old astronomer said in a call with the committee after receiving the award.