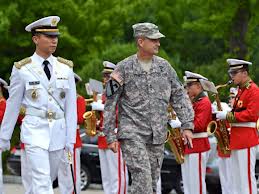 The computer-assisted simulation exercise, which will run until Aug. 29, will mobilize about 50,000 South Korean troops and 30,000 U.S. forces, including 3,000 U.S. soldiers operating overseas and coming here for the drill.

This year's UFG drill will adopt the so-called "tailored deterrence strategy" for the first time, which was introduced in October 2013 to respond to the DPRK's possible threats of nuclear weapons and weapons of mass destruction (WMD).

The South Korean military has claimed the drill is annually held and of defensive nature, but the DPRK denounced it as a rehearsal for the northward invasion.

The DPRK's General Staff of the Korean People's Army said Sunday that it will launch preemptive attacks at any time against the joint military exercise, calling it a "rehearsal for a nuclear war."

South Korea had suggested to the DPRK a week earlier holding the senior-level inter-Korean talks on Tuesday, but the suggested date overlapped with the joint military exercise, making the dialogue actually hard to be held.