Friday, 16 October 2020 (YJC)_ According to the office of Speaker Treasury Secretary suggested that President Trump will press Senate Republicans to accept a massive coronavirus relief package. 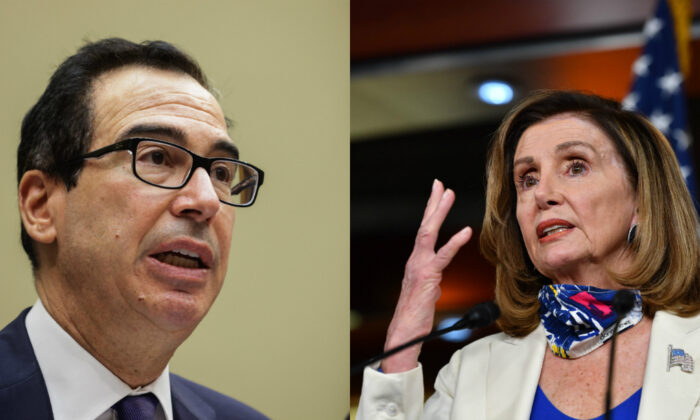 Treasury Secretary Steven Mnuchin suggested Thursday that President Trump will press Senate Republicans to accept a massive coronavirus relief package if a deal with Democrats emerges, according to the office of Speaker Nancy Pelosi (D-Calif.).

Trump in recent days has urged Congress to "go big" as lawmakers weigh another round of emergency stimulus, indicating Thursday that he's told Mnuchin to seek more funding than the $1.8 trillion proposal offered by the White House last week.

Yet Senate Majority Leader Mitch McConnell (R-Ky.) has rejected such a high figure, citing opposition from a long list of conservatives in his conference. McConnell is expected to stage a vote next week on a much smaller package, in the range of $500 billion.

On a call with Mnuchin on Thursday afternoon, Pelosi raised concerns about McConnell being a roadblock to a larger aid package, even if Democrats and the White House can seal an agreement. The Treasury secretary, according to Pelosi spokesman Drew Hammill, assured her Trump would intervene to lobby the majority leader on behalf of the legislation.

"The Speaker also raised Leader McConnell’s comments today about not being willing to put a comprehensive package on the Senate floor. The Secretary indicated that the President would weigh in with Leader McConnell should an agreement be reached," Hammill tweeted.

Trump's impact on the fate of a still-elusive deal remains to be seen.

Republicans on Capitol Hill have, throughout Trump's tenure, mobilized behind their Oval Office ally on a host of legislation, both mundane and controversial. Yet with Trump trailing in the polls — and McConnell fighting to save vulnerable GOP senators and keep his majority — cracks in the facade have begun to emerge.

McConnell on Thursday said in no uncertain terms that he won't call a vote on a stimulus bill anywhere near the size Pelosi and Mnuchin are discussing.