Syria, US fight common jihadist enemy, but not as one

BEIRUT, Aug 20, 2014 (AFP) - Syria and the United States find themselves on the same side of the battle against Islamic State jihadists, but a common enemy is unlikely to mean direct cooperation. 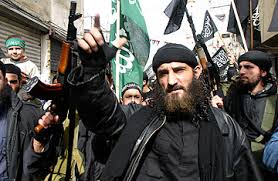 Washington began carrying out air strikes against the extremist group in Iraq earlier this month, and the Syrian government has also stepped up raids against the jihadists on its own territory.

But there is little love lost, with Syria angered by US support for anti-government rebels.

For its part Washington accuses Damascus of having allowed Islamic State to flourish so as to paint its opponents as extremists.

IS posted a video Tuesday showing the apparent execution of American journalist James Foley who has been missing since he was seized in Syria in November 2012.

The Islamist group threatened to kill a second reporter unless the United States halts its air strikes in Iraq.

Damascus has looked with suspicion at the American air strikes that began in Iraq on August 8, concerned they could lead to broader US action against both jihadists and regime forces in Syria.

"In striking IS, Damascus is telling the Americans that it doesn't need its air force against the IS," said Waddah Abed Rabbo, director of Syria's pro-government Al-Watan newspaper.

"We have treated America as an adversary for three years and six months," said Bassam Abu Abdullah, director of the Centre for Strategic Studies in Damascus.

"It is possible that the Americans will be convinced now of the necessity of cooperating with Syria, but Syria refuses any military or security collaboration without a deal on the political level."

Earlier this year, European intelligence services began reaching out to Damascus, worried about the influx of Europeans coming to Syria to join the ranks of jihadist groups battling the regime.

And the United States denies any interest in rapprochement with Damascus, even if they find themselves with a common enemy in the Islamic State.

"I would strongly disagree with the notion that we are on the same page here in terms of what we're doing," said US State Department deputy spokeswoman Marie Harf.

She repeated the US government's line that the Syrian regime helped strengthen IS by failing to attack it until recently.

And she said US involvement in Iraq didn't mean US strikes in Syria.

"In Iraq, we have a government that has asked for our help and asked for our support and welcomed us in. That obviously is not the case in Syria."

Experts, too, see little room for reconciliation between Damascus and Washington on the basis of their shared fight.

"The most that will happen is that there will be a tacit recognition that the US, Syria and Iraq are all co-belligerents in an armed conflict against IS," said Jens David Ohlin, a professor at Cornell University.

Nikolaos van Dam, a former ambassador to Syria and expert on the country, said Damascus would struggle to convince the West to partner with it against IS.

"Western countries do not want to be seen as collaborating with Assad, even if this would practically be better from a wider strategic point of view," he said.

In a rare moment of unity last Friday, the UN Security Council voted unanimously on a resolution aimed at weakening jihadists in Iraq and Syria.

"It is Assad who is in large part the cause of terrorism; he is certainly not the solution to it," he said.

In the absence of Western support, Damascus is likely to play the victim and continue to hit IS, according to Lina Khatib, director of the Carnegie Middle East Centre think-tank.

"If the regime does not get positive signs from the West, it is likely to... multiply its raids against IS to present itself as an empowered victim that is denied international support but that is capable of taking on its enemies."