Sunday, 25 October 2020_US Secretary of State of Mike Pompeo plans to visit India next week to further enhance strategic ties with a nation that remains locked in a military standoff with China as part of Washington’s persisting anti-Beijing campaign in days prior to the US presidential polls. 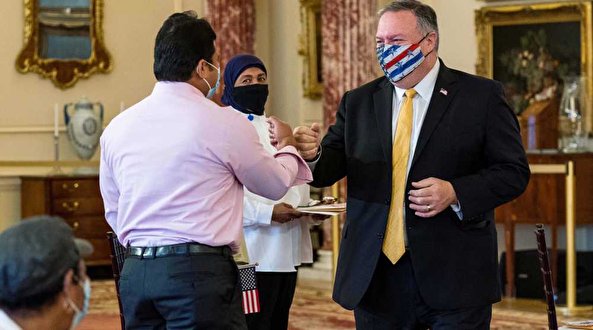 The top US diplomat will also visit two Indian Ocean nations of Sri Lanka and the Maldives and will conclude his trip with a visit to Indonesia – a country that also has territorial dispute with China in the South China Sea – in his bid to further exert US influence in the pacific region, Reuters reported Friday.

“We’re looking forward to strengthening critical relationships with our friends and partners, emphasizing our deep commitment to the Indo-Pacific and advancing our vision for long-term partnership and prosperity in the region,” said the principal Deputy Assistant Secretary of State Dean Thompson at the Department’s Bureau of South and Central Asian Affairs.

In what will be the first visit by a US Secretary of State to Sri Lanka in over a decade, Pompeo plans to press leaders in Colombo to scale back its dependence on Beijing, which has invested billions of dollars building ports and highways but left the island nation in debt, Thompson asserted.

“We urge Sri Lanka to make difficult but necessary decisions to secure its economic independence for long-term prosperity,” he added.

The island nation is a key part of Chinese President Xi Jinping’s Belt and Road Initiative although Colombo has sought improved relations with India, the US and Japan in recent years.

Similar US efforts are under way to push back against Chinese influence in the Maldives, tropical islands that lie on key shipping lanes.

During Pompeo’s upcoming trip, which US Defense Secretary Mark Esper will join, India is expected to sign an agreement that will give it access to sensitive US satellite data to help improve targeting of missiles and drones, Indian officials stated.

“There is great further potential in our defense cooperation,” an Indian official added as quoted in the report.

The development comes as the hawkish Trump administration continues its efforts to ramp up diplomatic pressure against China, as US President Donald Trump has made being tough on Beijing a key part of his presidential campaign to secure another term in office.

Pompeo led a meeting of foreign ministers from India, Japan and Australia earlier this month in Tokyo, a grouping that has been named the Quad, and intends to emerge as a bulwark against China’s expanding assertiveness in the region.