Dehqan: We will not disclose information about defense scientists

Tehran, YJC. Defense minister says Iran is not going to reveal information relating to its scientists working in the military field. 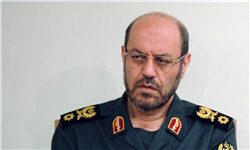 Iran’s Defense Minister Hossein Dehqan speaking at a press conference on Saturday pointed to requests by Western countries of Iran to disclose information about its defense scientists and said "We cannot accept that.”

He added "Not only would we not reveal the names to anybody; we will not give any information on this to anyone; because accepting the request means to have accepted the claim by arrogant powers that Iran is moving toward the production of nuclear weapons; which is false from the bottom up.”

In answer to a question regarding IAEA inspection of the Parchin nuclear site he said "The IAEA has done its inspections of Parchin and there is no reason to do it again. Besides that, the IAEA has accepted the fact that there has been no problem in Parchin.”

Dehqan also said that Iran is a focal point for regional peace and that as long as extra-regional forces are present in the area and the neighbor countries are influenced by the policies of countries outside the area, the region will be out of balance.