Monday, 02 November 2020_Belarus police have dispersed protesters who took to the streets in the capital Minsk on Sunday in continuation of opposition rallies that have been plaguing the country since President Alexander Lukashenko won a sixth term in office. 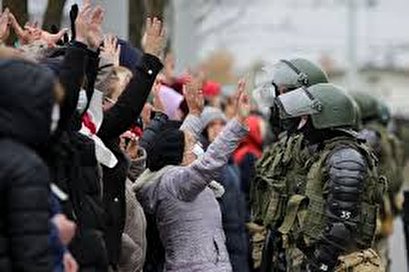 The protesters marched in central Minsk on Sunday, calling on Lukashenko to step down.

During the rally, reports said, police fired warning shots into the air to disperse demonstrators, who were trying to reach a site of mass executions under Josef Stalin' dictatorship, for an annual event. This year the march was not authorized by the authorities.

It was unclear what kind of weapons were being used, but Interior Ministry spokeswoman Olga Chemodanova denied reports that police had used stun grenades and other riot-control equipment against people. She confirmed, however, that many people had been detained.

Unregistered human right center Vesna put the number of detainees at above 200.

Belarus has been the scene of streets rallies over the past 12 weeks, after Western countries and Belarus’ opposition rejected Lukashenko’s reelection in the August vote.

They claimed that voter fraud took place, calling for the election to be repeated.

Lukashenko has rejected the allegations of vote rigging and ruled out a repeat election.

The president has also warned of a Western plot to destabilize the country and has turned to Russia's President Vladimir Putin for help with maintaining security.

Opposition figure Sviatlana Tikhanouskaya, who fled to Lithuania following the election had set a deadline of October 25 for Lukashenko to resign, but the president's ignoring of the ultimatum sparked further protests and a strike.