US strikes targets in northern Iraq near Arbil, Mosul dam

WASHINGTON, Aug 24, 2014 (AFP) - The United States on Sunday used aircraft and drones to strike targets in northern Iraq to try to rein in Islamic State militants, who have seized a large swath of territory in the region. 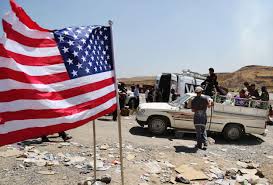 "US military forces continued to attack ISIL terrorists in support of Iraqi security force operations, using attack and remotely-piloted aircraft to conduct two airstrikes in the vicinity of Arbil and Mosul dam," a statement from Florida-based Centcom said, using one of the acronyms by which the Islamic State (IS) is known.

US forces acted "under authority to support Iraqi security force and Kurdish defense force operations, as well as to protect critical infrastructure, US personnel and facilities, and support humanitarian efforts," it added.

Iraq is struggling to regain significant parts of the country after a lightning militant offensive led by the IS jihadist group seized second city Mosul in June and swept through the country's Sunni heartland, as security forces fled.

The jihadist fighters have been bombarded since August 8 by US air strikes in northern Iraq, allowing Kurdish peshmerga security forces to claw back a limited amount of lost territory, including the Qaraj area, which they retook on Sunday.

Since August 8, US Central Command has conducted a total of 96 airstrikes across Iraq. Of those, 62 were in support of Iraqi forces near the Mosul dam, Centcom said.