​​​​​​​Race shows the incompetence of the Democratic Party

Friday, 06 November 2020_The race for the White House is tightening, something the Democratic Party should be concerned about. Not that their candidate is so close to winning the brass ring, but that it is so close and that they did very badly in Congressional races. 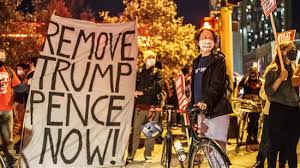 In the House they lost seats and the Senate, they may just eek out a tie, if there are two successful runoffs in January in Georgia, not a likely outcome. This shows the level of incompetence within the Democratic Party’s leadership.

Pelosi ad Schumer should resign their positions of leadership for this. And if they are not challenged successfully, then it shows the entire Democratic Party is incapable of governing.

It is good for Biden that he turned the Blue Wall back to blue, with Pennsylvania still out but likely to flip. But those states, Wisconsin, Michigan, and Pennsylvania, in particular, should never have gone Red, but for the incompetence of the Hillary Clinton campaign. There’s obviously a pattern developing. The Democrats can barely win seemingly easy races.

It’s all speculative, but would the US be in the position it is now if the leadership did not rig the primary elections against Sanders, both in 2016 and this year? He and his positions have been accepted by a majority of Americans, including Republicans.

It is only when both parties demonized Sanders’s politics that we went into a longtime slide into the dregs of Trumpism.

Trump railed against ‘radical, left-wing socialism’ while Biden bragged about ‘defeating that Socialist’. Both parties have undoubtedly shown that they are the party of for-profit corporations, not the people.

In all probability, the American people will have a newly elected president by Thursday. The era of Donald Trump at the helm will end in January if he relinquishes power. He’ll have no authority but what he’ll do to stay on will be out of a banana republic’s playbook, something the US encourages abroad but has never experienced at home.