Saturday, 07 November 2020_Hundreds of Iraqis have rallied in the capital Baghdad to renew call for an end to US military presence in the Arab country in accordance with a parliament vote earlier this year. 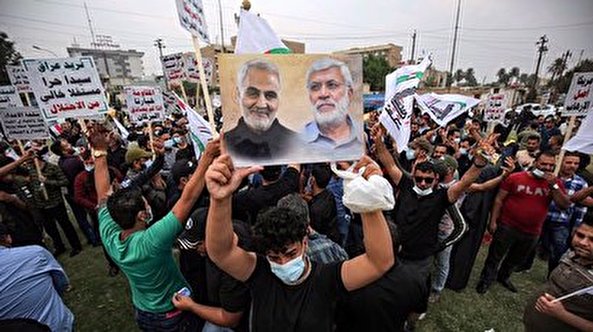 The Saturday demonstration took place in Jadriyah neighborhood near an entrance to the high-security Green Zone, where government buildings and foreign missions, including the US embassy, are located.

The protesters were seen carrying banners and chanting slogans demanding the expulsion of US forces.

"We will choose resistance if parliament's vote is not ratified!" read one of the banners at the demonstration.

Citing an unnamed Iraqi security source, Iraq's Arabic-language al-Sumeriyah news channel said that police made a heavy deployment of Security forces near the site of the protest for precautionary measures.

Iraqi lawmakers unanimously approved a bill on January 5, demanding the withdrawal of all foreign military forces led by the United States from the country following the assassination of Lieutenant General Qassem Soleimani, the commander of the Quds Force of Iran's Islamic Revolution Guards Corps, along with Abu Mahdi al-Muhandis, the deputy head of Iraq's PMU, and their companions in a US airstrike authorized by President Donald Trump near Baghdad International Airport two days earlier.