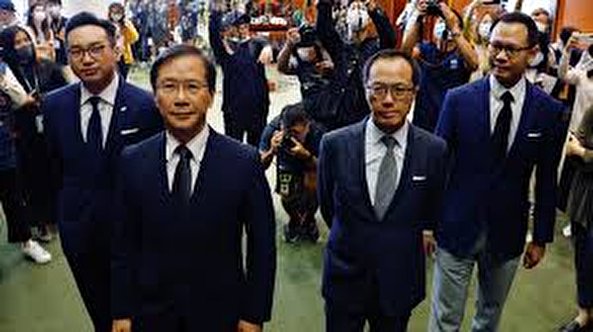 Alvin Yeung Ngok-kiu, Kwok Ka-ki, Kenneth Leung, and Dennis Kwok were disqualified from continuing in their capacity as city legislators on Wednesday, shortly after China’s parliament allowed authorities to unseat those lawmakers who seek secession or invite foreign interference.

The resolution bars anyone from the city’s 70-seat legislature who supports independence, refuses to recognize Beijing’s sovereignty over Hong Kong, or seeks help from “foreign countries or foreign forces to interfere in the affairs of the region” as well as “other acts that endanger national security.”

The resolution allows authorities to bypass the court system to unseat lawmakers.

On Monday, 19 opposition MPs threatened mass resignations should any of them be disqualified from the assembly.

The four excluded lawmakers also condemned the decision as “an obvious breach” of the Basic Law, the city’s mini-constitution, and their right to take part in public affairs.

“If observing due process and fighting for democracy can lead to being disqualified, it will be my honor,” said one of the four MPs, Dennis Kwok.

He said they would consult with their legal representatives before deciding whether to challenge the decision in courts.

Another disqualified lawmaker, Kwok Ka-ki, said, “Today, ‘one country, two systems’ no longer exists. Anyone who made this decision has to answer to history and every one of the Hong Kong people.”

Hong Kong has been governed under the “one-country, two-system” model since the city — a former British colony — was returned to China in 1997.