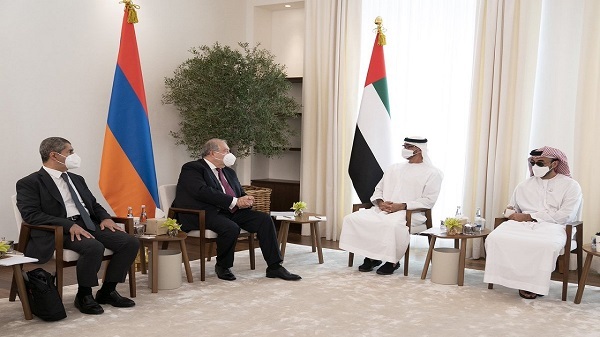 Sheikh Mohamed bin Zayed Al Nahyan, Crown Prince of Abu Dhabi and Deputy Supreme Commander of the UAE Armed Forces, received President of Armenia Armen Sarkissian, who is on a working visit to the UAE.

The two leaders discussed continuing friendship and cooperation, as well as the means of developing relations in a way that achieves the mutual interests of the two countries and their peoples. Also, a number of regional and international issues of common interest were reviewed.

Sheikh Zayed and the Armenian president also discussed various aspects of cooperation between the two countries, especially development, economics and investments that serve the development processes in the UAE and Armenia.

The two sides exchanged views on an array of issues and topics of common concern, including the two countries' efforts to confront the COVID-19 pandemic, and the possibilities for expanding cooperation between the two countries in this regard.

In this regard, Sheikh Mohamed bin Zayed affirmed the UAE’s support for the ceasefire agreement between Armenia and Azerbaijan, and hoped that the "comprehensive ceasefire"

agreement between the two countries - both friends to the UAE - would be a step towards a lasting, stable peace that turns the page on this conflict and reinforces the foundations of stability in the Caucasus.

For his part, President Sarkissian expressed his thanks to His Highness Sheikh Mohamed bin Zayed for his support and enhancement of relations between the two countries at all levels, stressing his keenness to strengthen these relations, which are growing in various fields.