Monday, 16 November 2020 _Turkish President Recep Tayyip Erdogan has called for an equal “two-state” solution in Cyprus and warned against what he described as “diplomacy games” over Turkey’s rights to offshore resources in the Eastern Mediterranean. 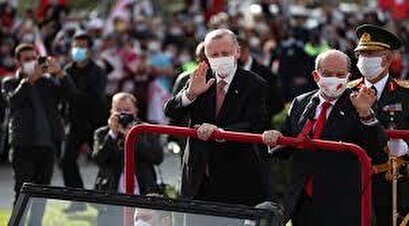 In a visit to the Turkish Cypriot-controlled northern territories on Sunday, Erdogan said he favored a permanent "two-state" division of the island.

Cyprus is divided into Turkish Cypriot-controlled northern and Greek Cypriot-controlled southern territories since a brief war in 1974, which saw Turkey intervene militarily in response to a military coup backed by Athens to annex Cyprus to Greece.

Greek Cypriots run the island’s internationally recognized government, while Turkish Cypriots have a breakaway state in the north and say offshore resources belong to them too.

"There must be talks for a solution on the basis of two separate states," said the Turkish leader.

Erdogan said that Ankara’s “priority is to ensure a fair, lasting and sustainable solution” in Cyprus that ensures Turkish Cypriots have security and legal rights.

“A two-state solution must be negotiated on the basis of sovereign equality,” he added.

He backed Erdogan’s calls for a two-state solution and offshore rights.

Tatar’s predecessor had backed reunification of the island.

Cyprus President Nicos Anastasiades condemned Erdogan’s visit as “provocative and illegal,” accusing Ankara of showing “no respect for international law, European principles and values, and its obligations towards the EU.”

He said Erdogan's visit served to "torpedo" UN-led efforts to work toward resolving "the Cyprus problem" in talks between Greek and Turkish Cypriots, Athens, Ankara and former colonial power London.

Erdogan, however, said during the visit that "the only victims in the Cyprus issue are the Turkish Cypriots, whose rights and existence have been ignored for years.”