Iran says did not intend to shoot Israeli spy drone 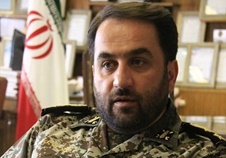 Providing comments on the drone which was last by Iran’s air defense last week he said "This missile was downed flying at 3700 meters which equals 12500 feet. It was shot down by the only missile that was fired.”

He praised coordinated operations among the Army’s air defense wing, IRGC’s aerospace, and Iran’s Civil Aviation that lead to the hunt of the drone.

"We meant to ground the drone like we had done the RQ170, that’s why we were observing it for 41 minutes. We shot at and downed it at the very moment that we decided to,” Esmaili added.

He said that if they had shot the drone upon entering the country’s airspace they would have lost the chance to collect its remnants, its camera data in particular.

Commander of Khatam ol Anbiya Air Defense Base also noted that according to the International Civil Aviation Organization, Iran’s airspace is one of the safest in the world.