Tuesday, 24 November 2020_A quick moving and rather weak storm system moved through parts of the Midwest this weekend and a quick burst of snow fell on Sunday in parts of Indiana and Michigan, where locally 1 to 2 inches accumulated. 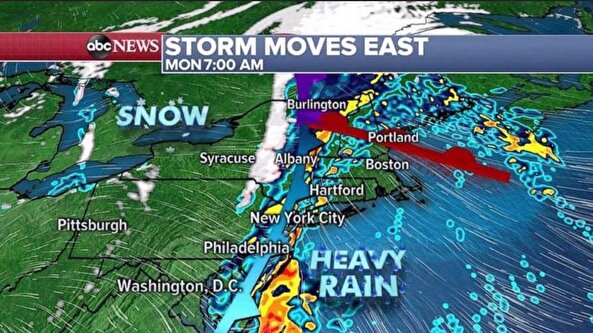 This same frontal system is on the East Coast this morning and will bring a quick round of very heavy rain to the major I-95 cities this morning including Philadelphia, New York City, Hartford and Boston. A couple of strong wind gusts and a few embedded thunderstorms will also be possible.

In the interior Northeast, some precipitation could change to snow briefly, especially in the higher elevations of the Catskills and Adirondacks where very light accumulation will be possible.

This storm system quickly moves out later today with some clearing arriving in the afternoon.

Elsewhere, attention turns to a rather large storm system that will develop in the central U.S. beginning mainly on Tuesday.

On the western side of this storm system, some heavy mountain snow of locally up 10 to 20 inches will be possible across parts of the Colorado Rockies.

Some snow will also likely sneak into parts of the immediate Denver metro area and the Colorado high plains. However, it will be tough for the snowfall to accumulate due to mild temperatures.

Meanwhile, on the eastern side of the snow, a burst of snow will also move into parts of the Upper Midwest and especially in parts of Illinois, Wisconsin, Iowa and Minnesota.

Again, accumulations should be light, because of temperatures near the freezing mark. The best chance for over 3 inches of snow appears to be Central and Southern Wisconsin. Regardless of precise snowfall amount, however, wet snow could make roads slippery in the region.

Meanwhile, on the southern side of the storm in the warm sector, some scattered severe storms could move across parts of Texas, Oklahoma on Tuesday sliding to the Mississippi River valley by Wednesday morning.

The strong storms could bring some gusty winds and perhaps a couple of brief tornadoes and the threat area will include places like Dallas, Shreveport, Little Rock and Memphis.

The good news is by Thanksgiving on Thursday, the bulk of the impacts of this storm system are done.

Some leftover showers will be possible on the East Coast but most of it should remain pretty scattered.

It will not be a washout, nor will it be cold, so on the East Coast there likely will be an opportunity to meet family members or friends outside for safe and socially distant Thanksgiving activities.