Monday, 30 November 2020_Pope Francis has appointed several new cardinals, including the first African-American, to hold the high rank in the Catholic Church, while advising them against using their titles for corrupt, personal gains. 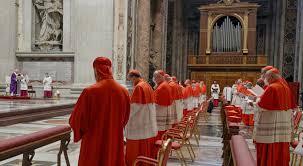 During a ceremony that was slimmed down due to the coronavirus pandemic, the pope appointed the cardinals on Saturday.

Only 10 guests per cardinal were allowed to attend the event in St. Peter’s Basilica.

Nine of the 13 new cardinals are under 80 and eligible under Church law to enter a secret conclave to choose the next pope from among themselves after Francis dies or resigns.

For the first time, the pontiff appointed cardinals from Brunei and Rwanda.

Cardinals from Brunei and the Philippines didn’t make it to Rome because of COVID-19 travel restrictions.

Among the newly installed cardinals is Wilton Gregory, the first African American to be appointed to the College of Cardinals.

He has served as archbishop of the Archdiocese of Washington, DC since May 2019.