Thursday, 03 December 2020_Azerbaijan says it has lost nearly 2,800 of its soldiers in the recent war with Armenia over the Nagorno-Karabakh region, the first details Baku has released about its military losses during the weeks-long clashes. 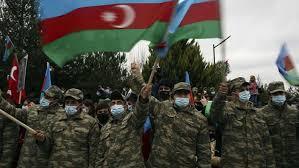 In a statement on Thursday, Azerbaijan’s defense ministry announced that “2,783 servicemen of the Azerbaijani armed forces were killed in the patriotic war”, adding that the identity of 103 of its fallen soldiers was yet to be determined via DNA tests.

The ministry added that one hundred more Azerbaijani troops were also missing.

Karabakh is internationally recognized as part of Azerbaijan, but it has been occupied by ethnic Armenian separatists backed by Armenia since 1992 when they broke from Azerbaijan in a war that killed some 30,000 people.

The conflict re-erupted in late September, becoming the worst fighting in the region in decades.

After six weeks of deadly fighting in and around Karabakh, Yerevan and Baku eventually agreed on November 9 to end hostilities under a Moscow-brokered deal that secured territorial advances for Azerbaijan in Karabakh and seven surrounding districts.

The agreement was signed after the Azerbaijani army overwhelmed Armenian forces and threatened to advance on Karabakh's main city of Khankendi which Armenians call Stepanakert after a 19th-century Bolshevik militant.

The truce, which was warmly welcomed as a victory in Azerbaijan, has prompted anger in Armenia with protesters demanding the resignation of Prime Minister Nikol Pashinyan.

Armenia had earlier announced that 2,317 of its soldiers were killed during the war which also killed at least 93 Azerbaijani and 50 Armenian civilians, but the true death toll is said to be much higher.

As part of the ceasefire, nearly 2,000 Russian peacekeepers have stationed along the Lachin corridor in Azerbaijan, a 60-kilometer-long route that links Khankendi to Armenia.